One of the key training principles that fitness experts trot out is “Listen to your body”, so you give it adequate rest and don’t overtrain. After setting out for what could have been a 50+ mi training ride in the cold, cloudy gloom of yesterday morning, my body said it wanted to go to Stoke Row for a coffee rather than drag itself up to Bledlow Ridge and beyond. And a lovely coffee it was, enhanced by a slice of Simnel cake and a chance meeting and chat with Steve E.

It’s not just your body you need to listen to. When the chain started chattering a couple of weeks ago, I measured it and found it had stretched to the recommended limit for replacement. I had a spare in stock, so fitted that. The chattering continued, as did the unique cycling phenomenon of chain suck, where the bottom of the chain stays attached to the chain ring and attempts to make a second circuit. This is a sign that the bike wants to have a shiny new chainset and gear cassette. Checking the maintenance log, I found that the bike had done 7,400 miles since I last replaced the whole drive chain, which experts reckon should last at least 4,000 miles – so definitely overdue.

Finding a 3-ring chainset and 9-speed cassette for a 20 year old bike is not straightforward, but eventually I sourced one via the internet, even if it came with the warning “Due to new regulations imposed by the Brexit trade agreement, your package may take 3-5 working days to clear customs checks in the UK.” Customs must not have been very interested, as it turned up today.

Meanwhile I had casually mentioned to the female cyclists in the family that my rear tyre looked quite worn, so I was planning to swap it with the front, to even the wear. They were both adamant that I did not want to have a puncture a long way from home, so should replace both. SJS Cycles in Bridgwater had the legendary Schwalbe Marathons in stock, and they’ve now been sitting in our garage for a week or so. 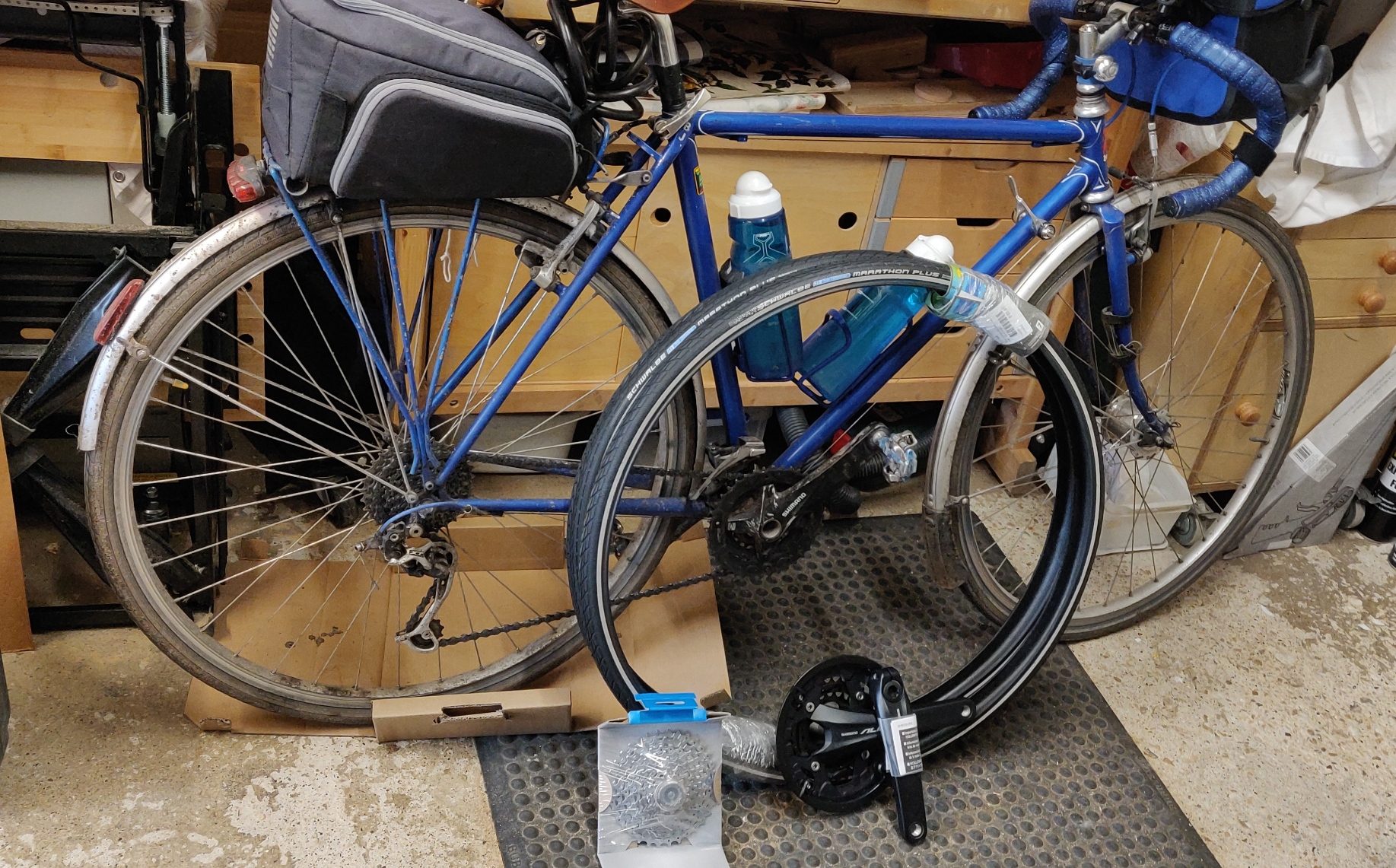 As luck would have it, the weather forecast for tomorrow is 1C at 8 am, rising to 4C at 2pm, when there’s also a 60% chance of rain. In other words, an ideal day to give the bike some TLC. Let’s hope all the bits fit.

The sunny March weather means I’ve been able to get some miles into the legs, ready for the Audax Challenge ride a month today. I’ve also managed to increase the distance each week by 10 miles or so, so that today’s ride was 53 miles and feels like decent progress (apart from the aching legs). This distance is long enough to get beyond the normal Goring Gap Cycling stomping grounds – beyond Wantage in fact, to a pretty village called Childrey.

The attraction of Childrey for a cyclists not the pretty village pond, but rather the village shop and cafe which does a very good cappuccino and flapjack.

The route outward to Childrey is hilly, bouncing along the dip slope of the North Wessex Downs in sight of The Ridgeway. Streatley Hill is optional. I opted out by taking the back way via Stichens Green, adding two miles to the ride by giving the legs an easier warm up. Most of the homeward half is slightly downhill, following the Vale of White Horse towards the River Thames. This is a delightful ride on a day when there’s a steady westerly wind pressing on one’s back. On a day with a March easterly it’s a different story. Like banging your head against a brick wall, it’s nice when you stop.

As a bit of a change this Thursday, here’s a ride to a new cafe, but one that is also open on Mondays. The Gromils have not been to it before, because we didn’t know it was there. I found out about it when I met some other cyclists at the Bucklebury Ford, and we got to swapping notes on where we had come from etc.

As with rides we have done to Bramley, the route is fairly flat apart from getting over Gatehampton (outwards) and Upper Basildon (homewards). At only 27 ft/mi, this route is even flatter than the Tour des Clumps (34 ft/mi), making it an easy way to get used to some extra mileage. The cafe is actually only just over a mile from Bramley Bakery, where we have been before. The return leg of the route passes within half a mile of Bramley railway station, making it an option for anyone wanting a shorter ride or an earlier finish.

Thanks to the good weather, training has been going quite well. The longest ride this week was 40+ miles, to go with 30 something last week and 20 something the week before. The additional miles have increased the appetite, but not yet had a significant impact on the second part of the power to weight ratio. 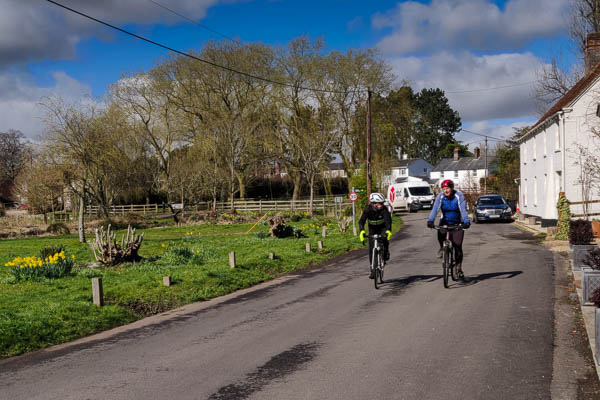 As with the last two Thursdays, I was happy to be joined by some cycling friends (aka the Goring Gromils) to seek out a cafe that is not open on Mondays. Today’s cafe was Honnesty at Donnington, near Newbury, which has to be one of the smallest venues in the Honnesty stable. Cunning route planning enabled me to offer a round trip that was less than 40 miles. The figure of eight shape of the route also enabled those who wanted to do the first quarter of the route followed by the last quarter. It gave a shorter journey, but missed the best scenery. 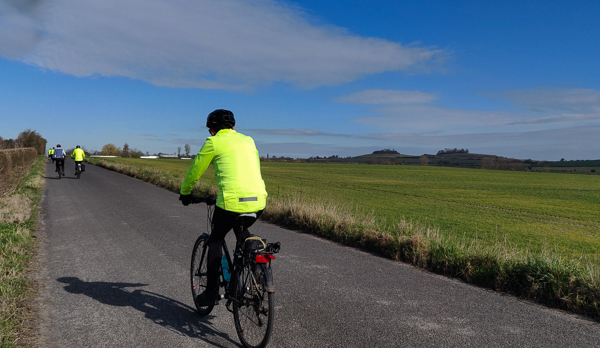 One of the places on the list of cafés not open Mondays is the Crazy Bear Farm Shop at Stadhampton. Conveniently this is just off the route of the Tour des Clumps, a favourite ride from Mondays. It has the distinction of being one of flattest 30 mile rides one can do from Goring. This makes it a good choice for springtime, when you feel like you ought to go further but don’t have the legs to go steeper.

This was the winter version of the tour route, taking the pavement cycle path along the busy A415 from Clifton Hampden to Dorchester, rather than using the bridleway across the fields from Day’s Lock. The Wittenham Clumps themselves are visible on the right much of the time when tackling the route clockwise, giving an encouraging feeling of accomplishment as you look across from the higher ground between Ewelme and Ipsden on the home stretch.

If you’re reading the email subscription version of this post, click on the title to see the full version with map.

To see details of the profile and other stats, click on the Learn More button. 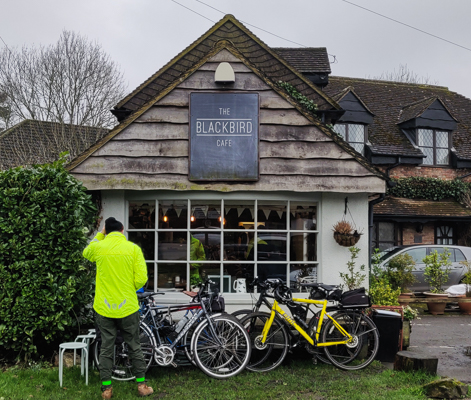 What better way to get in some training miles than to spend it on a ride with some friends? A ride to one of your favourite cafes, that’s what.

I usually go cycling with local friends every Monday morning, and The Blackbird at Chapel Row used to be one of our favourite destinations – until it stopped opening on Mondays. Just now Storm Eunice has indirectly stopped me cycling on Mondays, as it took the roof off my granddaughter’s daycare centre. Now my wife and I have been (very willingly) pressed into service to cuddle and care for the darling one-year old. Ironically the target for the daycare to be fixed is roughly the same date as my Audax ride at the end of April. So now it’s Training Thursdays, with friends welcome and a hit-list of local cafes that don’t open on Mondays.

Back in 1982 I was living in Canada. No email or social media, so I used to get those flimsy blue airmail letters from my parents. In one of these my Dad told me that he’d celebrated his 70th year by going for a 70 mile bike ride. He seemed quite please, and I was very impressed, even though I knew he’d been a keen amateur cyclist in his younger days.

Fast-forward 40 years and it’s now my turn. Although I’ve never been a competitive cyclist I do enjoy it (when it’s not raining!) and think it’s a great way to keep fit and healthy. So when I saw an advert for an Audax fundraising challenge ride for Launchpad Reading , I thought this is something I should do.

Launchpad is Reading’s homeless charity. Originally founded in the 1970s by students as a soup kitchen, it’s now evolved to provide a comprehensive service of advice and support for homeless people. None of this comes cheap, of course…

I worked in Reading for over 20 years and often saw homeless people huddling in doorways and begging for cash. The wise advice was never to give cash as it would likely go on drugs, but to help them via a suitable charity, which is where Launchpad comes in.

Audax is not a term familiar to many non-cyclists, but it’s been around for over 100 years. It’s a non-competitive form of cycling in which participants attempt to cycle long distances within a pre-defined time limit. I’ve done Audax rides in the past, but not usually more than 100 km, which is the distance I’ve signed up for on this challenge ride. The last one I did was five years ago, so some serious training is called for.

The challenge route is Caversham to Farmoor (near Oxford) and back, which is advertised as 110 km, and will probably turn out to be about 70 miles in practice. Less than 8 weeks to go and the furthest I’ve ridden so far this year is 28 miles.

To donate to Launchpad Reading, go to my JustGiving page.

For details on the ride itself (or even to register and come along as well), go to https://www.tributeaudax.uk/