The Devil’s Staircase deserves its reputation as one of the steepest roads in Wales.  I thought I might manage to ride the 25% gradient at least as far as the first hairpin,  but the laws of physics and biology dictated otherwise.
First the front wheel started skidding on the remains of last winter’s grit-salt, then it gave a few bumps as it lost and regained contact with the tarmac. Finally it was too much. My heart rate was above what is considered sensible for someone of my vintage, so it was time to get off and walk. This was a similar speed to riding, just a little easier.
The Devil’s Staircase is one of three climbs out of valleys between Abergwesyn and Tregaron.  Although also steep, the others were rideable. The second was the valley of the Towy and was marked with the Ceredigion boundary sign.  There was a handy rock to sit on, making an ideal spot for lunch.
As I was setting up the camera for a selfie of my lunch spot, a road cyclist in bright red and yellow came whizzing past with a friendly “Morning” and charged at the climb.
He was followed by half a dozen other members of Taff Ely CC, so I grabbed the camera and took some shots of the peleton climbing the zig – zags up the side of the valley.
They were leaving the cafe in Tregaron when I arrived (they must have had a long lunch), so I asked if they’d cycled all the way from Cardiff.  No, they’d driven to Rhayader and were returning via Cwm Ystwyth and the Elan Valley. 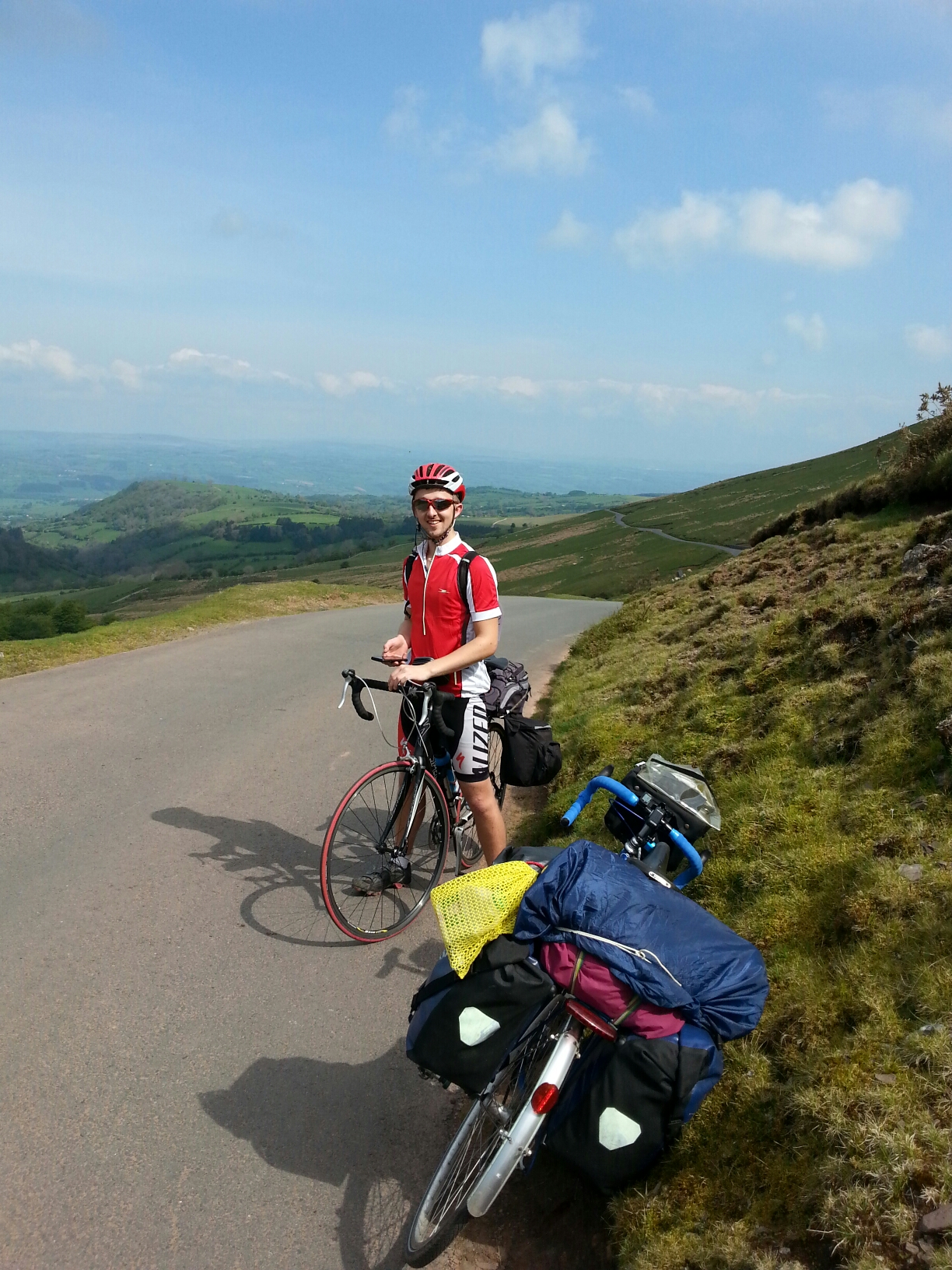 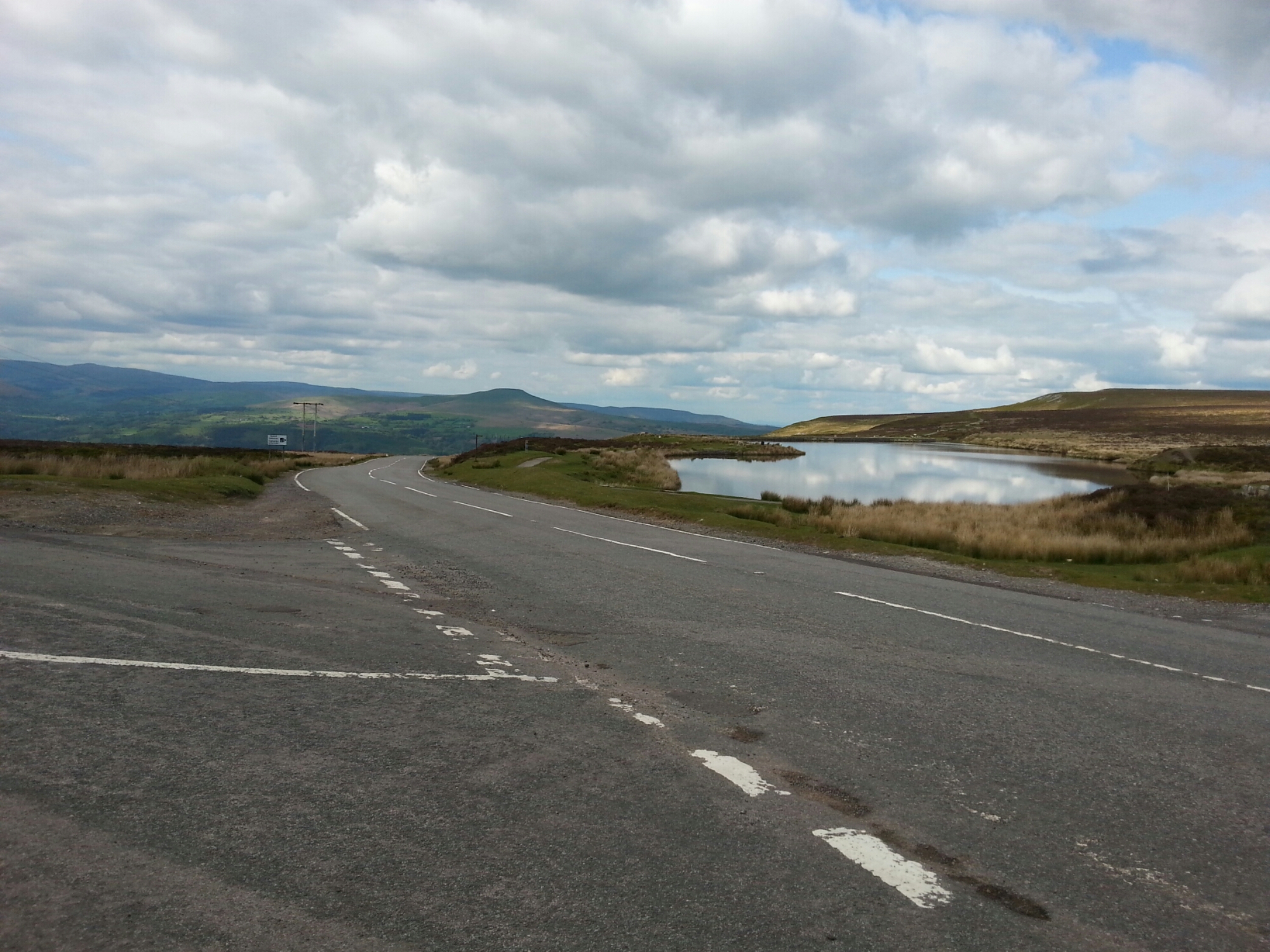 All is packed,  ready for the 08:36 to Newport tomorrow. For those interested,  the planned itinerary includes the following campsites:

…still some work to do.

C2C Cymru – a great idea for a coast-to-coast ride in Wales. But should it be Caerleon to Caernarfon, Casnewydd to Caergybi, or some other combination?

The idea of a Welsh “End to End” had been on my mind for years, something to daydream about when work was tedious. Short enough to fit into a week, it should have a distinctive Welsh character to make it worthwhile. More daydreaming came up with the concept of The Dragon’s Backbone, taking in all the big climbs from one corner to the other.

I was 18 when I set out on my first-ever cycle tour. Myschoolmate Russ and I had youth-hostelled from Queensferry (the north-east corner) to Pembrokeshire (the south-west) and back. A journey along the opposite diagonal would have a nice symmetry to it.

Our route  had taken in the Bwlch-y-Groes, which we were told was the highest metalled road in Wales. Recently I’d read that this Bwlch was not the highest road, and that the Gospel Pass from Llanthony to Hay-on-Wye was slightly higher. True enough, electronic OS map has a spot height on the Bwlch at 545 m and one on Gospel Pass as 549 m. Then the Tour of Britain route was announced, with a stage finish on The Tumble. This seemed like too good a chance to miss, as I could take in The Tumble summit (not to be confused with a village of the same name near Swansea) en route from Newport to Llanthony. Add in the Devil’s Staircase and Nant Gwynant for sentimental reasons, join the dots and the route was pretty much there.

The south-east and north-west corners are well-served by rail, so I could easily get from home in Oxfordshire to Newport for a 10:00 am start. So that was it – Casnewydd (Newport) to Caergybi (Holyhead) via Caerleon and Caernarfon.