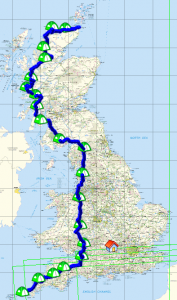 July 2015 and preparations were being finalised for the grandest of all cycling’s Grand Tours. Bikes were being fettled, carbo loaded. Saturday 4 July saw Le Grand Depart, when the intrepid cyclists set off on their gruelling three-week parcours. C’est Le Tour de France, ne c’est pas?

While the Tour de France riders were preparing to pootle 13.8 km around the flat streets of Utrecht, intrepid father and daughter combo Steve and Dino headed to Cornwall ready to take on their first stage, 62 notoriously hilly miles from Land’s End to Padstow. The professionals’ route may have taken in higher mountains than Shap Summit (1393 ft), but they did so on bikes weighing only 6.8 kg, instead of solid British steel touring bikes with a loaded weight of 35 kg.

From Cornwall we went via these famous locations:

before finishing at John O’Groats on Sunday 26 July – the same day as the professionals were swigging their champagne en route to the Champs Élysées.

For the as-it-happened account of the epic, go to Dino’s blog of the journey. You’ll need to read it backwards, as a blog has the most recent entry at the top.  For a four minute summary, see the bottom video below.

One of the most beautiful places we visited was the Kyle of Durness in the north-west corner of Scotland. We couldn’t take the ferry across to visit Cape Wrath for our rest day, as the ferryman had taken the day off to go to the Durness Highland Gathering. Our compensation was a lovely walk in the morning and the fun of the highland games in the afternoon.