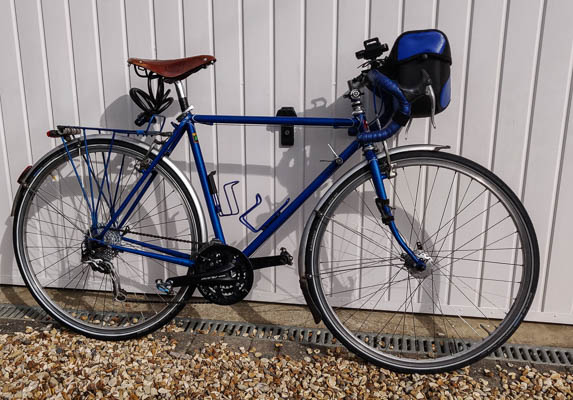 BJ (the bike) is looking shiny and ready to go after last week’s sojourn in the garage away from the snow and north winds, with a new chainset, cassette and tyres. Hopefully the motor is also showing the advantages of a week off.

The hilliness of rides can be assessed by measuring the amount of climbing relative to distance. Gromils rides vary from the low 30s (Tour des Clumps is 34) to over 80 (Twin Peaks of Streatley and Whitchurch is 80, as is Catsbrain and Gatehampton for a much shorter ride). This ride checks out at 33 ft/mi, at the flatter end of the range.

One of the best types of road for cycling is a former trunk road that is not bypassed by a motorway or dual carriageway, as it tends to be wide, well-surfaced (at least formerly) and relatively quiet. In the case of the A40 from Postcombe to Stokenchurch it’s also a well-graded steady climb, much easier than the Kingston Blount ascent parallel to it.

This week’s Thursday ride heads to a café that was popular with Gromils before it stopped opening on Mondays – Coffee On The Green in Stokenchurch. This was formerly known as the Back Street Café, before it moved from a back street to The Green. It’s a 40-something mile ride that takes in one of the easiest climbs up the Chilterns Escarpment and one of the most delightful descents on the dip slope. From the junction at the top of Kingston Hill to the bottom of the Hambleden Valley there’s 10 miles of near-continuous downhill. The route takes full advantage of the forecast westerly wind for much of the distance, with the final stretch sheltering in Chiltern lanes from Henley to Goring.

For those not wanting to do the whole distance, return by bus from Stokenchurch is possible with a bus-friendly bike. Alternatively you could return by train from Saunderton, a mere 6.5 miles from the café. You’d need £37 for the fare though, and it could be quicker to cycle. There’s also the options of bus or train back from Henley.